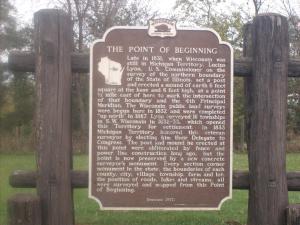 The first permanent settlement in Wisconsin was in Hazel Green in 1825. In 1831, surveyor Lucius Lyon began surveying the land just south of what is now known as Hazel Green. South of Hazel Green stands a historical marker for the “Point of Beginning”. The survey point was marked in 1831 by Lucius Lyon, a surveyor who participated in the survey parties that established the baseline and the 4th Principal Meridian used to determine townships in the State of Wisconsin. To mark the spot, Lyon and his survey party inserted an oak post in a mound that was six feet tall by six feet square. This is the place where all land that was to become Wisconsin would be measured.